Around this time last year an Australian real estate millionaire advised young people that they might one day be able to afford mortgages if they were able to forego regular avocado toast, which he priced at AUS$22 a pop. It was an unrealistic comparison, and quickly ridiculed. Most millennials won’t be able to enjoy home ownership in the same way their parents generation did.

But it looks like other perks of previous decades are under threat too, and it may be worth using everyday millennial essentials as a cost comparison. For example: A free press.

Newspapers are under threat. Subscriptions and sales – which made up a bit of newspaper revenue – have fallen through the floor in most cases. Advertising sales – which made the bulk of revenues – have gone digital, and not to digital editions, as we hoped, but to Google and Facebook, who aren’t likely to threaten their valuations by sharing some of the loot to prop up newspapers.

If we don’t find a way to make a generation that has never paid for news to start supporting newspapers, some and maybe most will go out of business.

The millennial toast comparison is as mouldy as day-old avocado but consider others. A latté in Starbucks can cost £3. In hipper artisanal coffee shops you could be looking at £4 or more for a flat white. We’re not going to sneer at a generation with different ideas about where they spend their hard-earned disposable income, especially when they’re deprived of stuff older generations took for granted.

It’s up to them if they feel they get more value from a £4 coffee than they would from a newspaper subscription. But it’s the news industry’s fault that it hasn’t been able to persuade young people that their product might be a better investment than their local coffee shop.

Newspapers can consider what they’re up against. Netflix, with endless shows and movies for under a tenner. Amazon Prime, for around £6.50 a month: Lots of video, next day delivery, eBooks and other goodies. Apple Music or Spotify, with millions of songs a swipe of the screen away. Facebook, Twitter, Snapchat, Youtube… all free, but requiring a home wifi connection of £25-£50 a month, a 4G mobile subscription around the same price and a mobile phone, which if you go for a top of the range iPhone X could run to £1000. A Playstation Pro subscription, that enables you to play Star Wars Battlefront 2 (£30) with friends on the other side of the world costs £50 a year.

That’s before we add the other essentials of life as we approach 2020. Uber rides (because who can park or drive in the city). Food deliveries. Weekends in Airbnbs and clothes from Net-a-Porter for those who can afford it, Uniqlo for those who can’t.

And then the little things. Freemium upgrades on smartphone games and other apps for a couple of £s here and there. A cocktail, an artisanal-brewed IPA… perhaps even a newspaper?

It’s understandably difficult to persuade people with all this at their fingertips that they should allocate extra to a newspaper. Especially when for the past twenty years newspapers on the internet have been free.

Media gurus harangued publishers that paywalls would exclude them from the conversation and, in any case, walling readers off from your content would only encourage them to go elsewhere.

But today’s media landscape looks less like an open network of freely-shared content dotted with a few insurmountable walled gardens. It’s more like a network that’s open in parts, closed in others. Most publications let some content circulate freely on social networks; some allow a small number of articles to be read each month before requiring subscription. There are newspapers with free pages and premium content; others with free pages, subscriber content and premium content even paying customers must fork out more to read.

Instant sharing on social media like Twitter and widely-available free services like the BBC are said to have commoditised breaking news – but blogs demonstrate that readers often have more specialised knowledge than paid opinion columnists (a phenomenon editors readily acknowledge). Too bad that opinion columns and analysis were among the first paywalled sections. The internet means anyone can have an opinion: But can anyone come up with the next Stranger Things, or the next Fortnite: Battle Royale?

Unfortunately for us freeloaders the age of free news media is coming to an end. This excellent essay by Megan McArdle explains why; it’s outlined and expanded on in a Tweetstorm by the same reporter.

All right, folks, I have exactly one half hour to Tweetstorm my latest column, and explain just how bad the economics of the media industry are. Subtitle: why you can’t have all the awesome free journalism you want and have come to expect. Let’s go! https://t.co/Wk3NKnh3XE

Worth noting, from the point of view of the journalist:

And the problem is that if no one pays journalists after they turn forty, and no one ever pays them very well, and everyone expects them to live in NYC/DC/SF/LA, eventually the kidz will notice that journalism is a one-way ticket to poverty. And then they won’t want to journalize

Paid journalism is working well for a limited number of publications. In an interview with ReCode, Financial Times CEO John Ridding explains how launching a paywall in the face of criticism from the “information needs to be free” cult has paid off. 925,000 subscriptions, as of April, with 60 percent digital and reliance on advertising beaten down to only 40 percent of revenue. The Wall Street Journal, New York Times and Washington Post are reporting similar bumps. For less established media, there are positive stories too. Tech publication The Information charges a premium for a couple of very well-researched reports daily.

You could argue that most of these can go on corporate accounts, though. The NYT and WaPo are discretionary purchases but FT, WSJ and even The Information are bought by people who can expense it because they need that knowledge.

The NYT’s publisher argues that its new subscribers are casting a vote for clarity in a chaotic age; with the self-regard for their craft that amuses British journalists no end, the Washington Post changed its slogan to “Democracy Dies In Darkness.”

We might mock but persuading potential subscribers of the need to support sane voices seems to be working.

Can the same be said for other newspapers? Or new VC-backed digital-only companies like BuzzFeed or Vox, where the revenue strategy is dancing to whatever new algorithmic beat Facebook is playing each quarter?

All this news is free, but for how long? And if readers won’t pay for it, who will? Rupert Murdoch argued that Facebook and other social media companies should pay a “carriage fee” for the content users post on the platform. Facebook engineers wonder why its leadership bothers with newspapers at all, given that they make up only 6 percent of content shared on the site – but certainly a greater percentage of the grief Facebook gets from press and legislators.

Mark Zuckerberg told reporters yesterday (again) that Facebook had zero plans to subsidise newspapers (he hinted that government subsidies might be a better idea: What could possibly go wrong?)

It’s not a lost cause. We lost the habit of paying for news content: We need to find ways to educate people back into the habit. The tweaks and changing barriers newspapers like the NYTimes and FT make to their paywalls are obviously valuable proprietary business data, but other publications can learn. We can learn too from digital content sites: Cancelling a WSJ subscription is a pain in the neck and necessitates making a phone call to their subscription office. Why can’t it be like Netflix, where you can cancel with a couple of clicks?

There may be something in bundling. Perhaps not bundling a selection of newspapers together in a Spotify-like package for $10-15 a month, but including a newspaper subscription with another digital offer could help build the habit: Amazon Prime users already had special access to the Washington Post.

Publishers might look again at deals like Starbucks ran a few years back with newspapers: Buy your coffee, get free access to a paper, or some of it. Wooden newspaper holders used to be a feature of European cafés back in the day. Perhaps a contemporary equivalent might be a QR code on your coffee cup that opens a stripped-down newspaper when scanned. The FT’s CEO compares the daily price of the newspaper to “less than the price of a double espresso”, so publishing economists remain keen to link newspapers to coffee consumption.

There are longer term solutions. Whether we want newspapers to be around in a decade depends on what sort of people we want to be. John Ridding again:

Even further down the line and solutions could be tech-based. Digital paper that delivers the newspaper reading experience without the distractions of an iPad or the clunkiness of a Kindle.

Like any major project, we need to know our destination to deduce how to get there.

Do we want the media world to be like Twitter, where analytical voices are drowned out by furious mobs and anonymous trolls? Is it fair to bet that at some point readers will tire of the constant state of agitation and anger that’s become the default language of some social platforms, and decide it’s worth paying for the luxury of being a Times guy, or an FT girl?

We want to see informed and engaged citizens reading a newspaper while they’re drinking their morning coffee (on the Hyperloop, in their automated vehicle, their personal drone, whatever). A lively media with daily national papers and local press that relies on a mix of reader subscriptions and advertising. A broad spectrum of political opinion, not a race to the bottom than marginalises unorthodox voices. Slimmer newspapers, perhaps, to account for the variety of other distractions available to digital users. A judicious use of multimedia and video. Perhaps fewer journalists but better salaries and conditions for those in the profession to encourage experience as well as energy.

Utopian? From here it seems as distant as those 1970s images of residents picnicking on a Space Colony, or in their flying cars. And as Peter Thiel famously complained, we didn’t get flying cars or space colonies, we got 140 characters. Perhaps in the next decades we should aim higher. 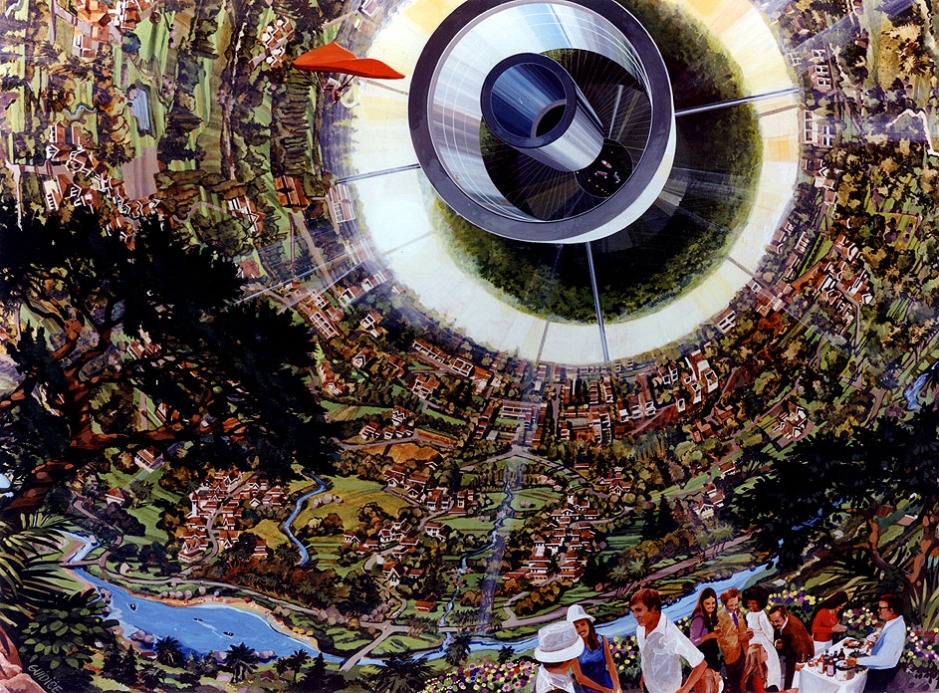